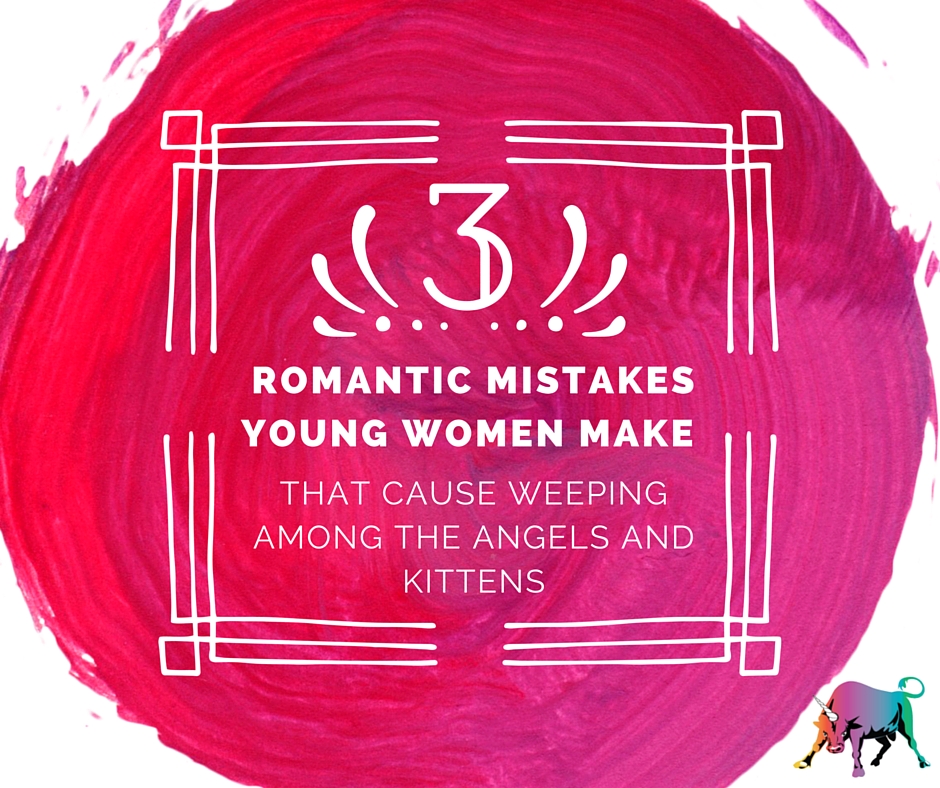 Last week, I wrote about missteps in the professional world in Bullish: 3 Career Mistakes Young Women Make (And How To Smash The Competition).

This week, let’s talk about romantic mistakes that can wreck your twenties and completely derail other aspects of your life (it’s hard to work on your career when kittens weep for your pain!)

Mistake #1: Assuming that just because a man is older, he’s more mature.

I have more than once made the mistake of assuming that just because a man is over a certain age, he’s necessary possessed of oh-so-much gravitas. I mean, if I were a man, I’d make damn sure that I knew how to order scotch before the time that my chest hair started going gray.

(My BFF has often been the subject of vicious put-downs from men who claim that she’s “only” successful in her career because she has big tits. As though that were even possible. Her response: “Male attractiveness is really easy. Go to the gym and get a nice suit. Shut the fuck up, I’m working.”)

As I said in Bullish: How to Age with Panache and Strategic Awesomeness, aging is a parade of indignities — to compensate, you must gather more, well … dignities. But my opinion is by no means universal.

So I have been quite surprised when men over forty refer to their shoes as “kicks,” decorate with posters, think it’s cool to live with roommates, cannot tell a hand towel from a dish towel, and laugh at the thought that they could be responsible for the care of a small child.

My dad, a Navy man, has always liked to say, “When you assume, you make an ASS out of U and ME.”

A reader wrote in to say:

I know you don’t normally deal with Man Issues, but I really like your advice and need to be more of a badass, so you seem like the one to talk to. I started dating a guy three years ago when I was 31 and he was 39. We both said on our 2nd date that we wanted kids. So I thought he understood that we would have to have them soon because.. that’s how biology works? We made references all the time, like hinting that we could name our kid something hilarious based on a movie we both liked, et cetera. After three years when I said we should really get on it and have a baby he said that he loved me but didn’t know when he would EVER be ready to have kids. I said, um, you know, I think you kind of just killed my last life chance to have biological children, since I’ve been with you for ages 31-34 – really, you never did the math? He looked at me like I was crazy. How is that crazy?

What a heartbreaking situation. And almost a taboo one to talk about, so I’m glad you wrote in.

I could find plenty of conservative authors who would say that the sexual revolution backfired on women — see Dr. Miriam Grossman’s Unprotected, for one. And then it would only be fair to hit back with Jessica Valenti’s The Purity Myth: How America’s Obsession with Virginity Is Hurting Young Women.

I recently went on a first date with a man who was bragging about how non-judgmental he was. Interesting, I thought. That is actually not a good way to impress me. I believe in making good judgments. I believe in judging racists, drunk drivers, and people who act unethically in a variety of other ways. FirstDateGuy followed up his comments with, “I wouldn’t judge a guy who got divorced because he was unhappy.”

“Well,” I said, “what if his wife is very unhappy that he’s divorcing her based on possibly ephemeral feelings, when he would probably have promised in his wedding vows precisely not to do that?”

He was truly baffled. I continued, in my Socratic-method voice, “I’m curious, then. What do you think the point of marriage is, if in your view it can be ended based on the same reasons you would end a dating relationship?”

I’ll end this anecdote here (strangely, my debate-style Inquisition did not tank the date, although I declined to see him again); the point I want to make is just that you can’t assume that any two people automatically mean the same thing by “love,” “marriage,” “commitment,” or any other warm-and-fuzzy words.

My first thought to this question was, “Wow, that guy doesn’t really love you at all, because he wasn’t really looking out for your best interests.”

Why do I think that, though?

Hrm. Because I grew up in a moderately Christian environment, and some Christians at some point told me that, “Love is a commitment to the best interests of the other person.”

These are the same Christians who think gay people are going to hell, that the earth is 6,000 years old, and that dinosaurs are a trick; I have huge problems with them for many other reasons. But I do think that this idea of love is a good, decent, and humanistic one. (I’m also not saying that Christians invented this. They just passed it to me through cultural osmosis.)

He probably didn’t think anything else was required of him. He didn’t think he was supposed to play chess three steps ahead and think about what was best for his girlfriend. He didn’t think about the fact that there’s an opportunity cost to everything; by staying with him, she was prevented from actually achieving her goal of having children. As I wrote in Bullish Life: Are Your Friends “Supportive” or “Enabling”?, sometimes being nice in the moment isn’t being nice at all.

The only rational response to this is to accept a position of existentialist dating. “Love” does not necessarily mean what you think it means. Every term that might get thrown out in a romantic relationship requires further definition. Someone who loves you is not necessarily saying that he’s got your back. At all.

Lots of men are going to tell you they love you. A lot of them have no idea what they’re talking about.

Mistake #3: Thinking Things Will All Work Out, Because They “Have To”

I was once on a date with a guy who said, “The reason I like you is that you’re the only woman I know who’s logical.”

Oh no, I thought. You are a terrible misogynist who has just insulted more than half of my friends and role models. I think that you are ragingly arrogant and that what you mean is, I like you because you are agreeing with me right now.

I sighed, and said, “Why do you think all other women are illogical?”

“Well, for instance,” he said, “how come every time you sleep with one, she assumes you’re in love with her?”

I sighed. Deeply. “Well, you’re a human being. Are you ever in a situation where you kind of assume the best, because the worst is too horrible to think about?”

“Sure,” he said, not apparently seeing the connection.

“Oh.” The rest of dinner was pretty silent.

The brave new world we live in in which people now spend 10-20 years dating before committing to a life partner (if they ever do) necessarily implies that we will all be passing one another like ships in the night, or getting together and breaking up, repeatedly, for a very long time.

At least in New York, most men blithely expect to spend their twenties devastating women (*Shrug.* It’s not my fault. We weren’t married or anything), and then, in their late thirties or forties, they want to find some special lady who hasn’t been devastated.

It’s not a good system. It’s a prime violation of Kant’s Categorical Imperative, which posits that ethical behavior means acting as though you would will your actions to be a universal law — in other words, don’t do anything that, if everyone did it, would make your own actions and desires completely impracticable.

In this sense, your dating life is very much like your career, in that you will achieve only disaster by thinking that someone else has a grand plan for you. (In fact, one of the very first Bullish columns approached this issue from the opposite angle: Bullish: How Business is Like Dating).

When people write in asking for career advice, I usually reply with a plethora of practical suggestions (see Bullish: How To Make Money From Being Hip As All Fucking Hell). I’m afraid I can’t offer Betsy much more than sympathy, and some guidelines for the future.

Strangely, I’ve quoted my dad’s favorite expression — “When you assume, you make an ASS out of U and ME” — twice this week, both in front of a classroom, teaching logic, and here, encouraging ladies not to let wishful thinking send them down a rabbit hole of unpleasantness. Somewhere, a sad kitten is making rainbows with its tears.

Just as you must design and direct your career (see Bullish: Are You Under-Reinvesting in Your Career?), the same is true of your romantic life. The universe is indifferent. Some bullishness is in order. 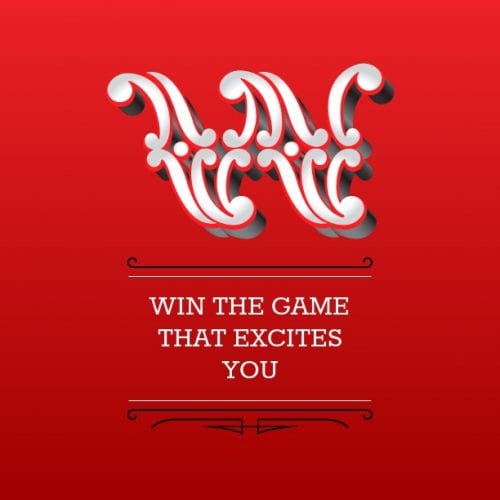 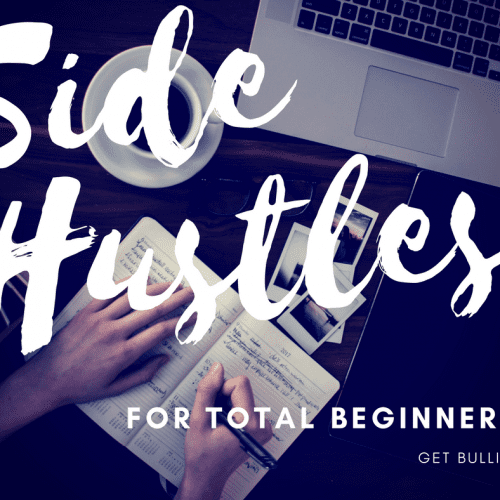 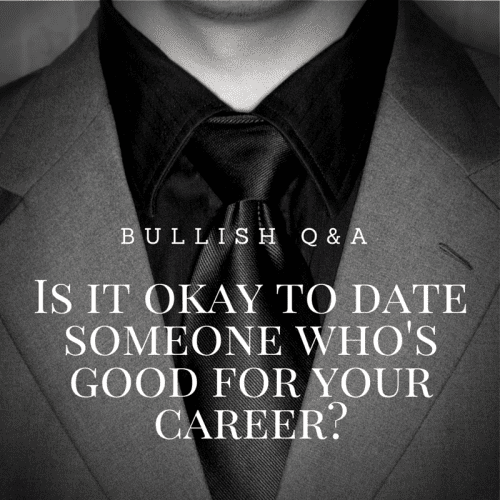