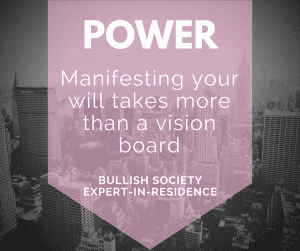 The following is cross-posted from inside The Bullish Society and was written by this month’s Expert-in-Residence, name redacted, an expert on rising through the corporate ranks. We kind of lost our shit around “Shoot for Machiavelli, and you’ll land somewhere around Seth Godin,” and decided to boost this to the blog in one of our rare guest posts. -Jen

Raise your hand if it’s ever been suggested that you read Dale Carnegie’s How to Win Friends and Influence People and/or Sun Tzu’s Art of War as cornerstones of modern business thinking.

At first blush they seem quite at odds with each other, but beneath the surface they are about the same thing: acquisition of power.

For a refresher, Carnegie’s 288 pages of a rich white man listening to himself talk (no joke, the audiobook is over 7 hours!) can be condensed into a rather short bullet list of basic advice for how to not be a total asshole in dealing with other humans. And yet, many men have confided in me over the years that How to Win Friends is still the secret to their success, 81 years after its initial publication.

Give honest and sincere appreciation. Become genuinely interested in other people.

Be a good listener. Encourage others to talk about themselves

Make the other person feel important – and do it sincerely

…This is how women are enculturated from birth. If being cordial is the key to accumulating power and success, why haven’t women long since eclipsed men in leadership? One reason is, of course, patriarchal systemic sexism. The other is that this advice is bullshit.

Carnegie’s advice helps men who are aggressive, manipulative, and power hungry appear less so. Women, on the other hand, are not “acting as if.” I will not wade into the evolutionary biology arguments that we are truly kinder and gentler, but it is incontrovertible that we are raised to act as though we are and then we are repeatedly stepped on because of it. To succeed in the existing system – not some kinder, more egalitarian “be the change you wish to see in the world” future utopia – we need to embrace our inner asshole.

This is not to say that “the way men do it is better/default and we should adapt.” Of course not. If men who tend to succeed in business are duplicitous (and narcissistic and often psychopathic), and they adopt the trappings of kindness for personal gain, then we can be social justice warriors who crib proven domination tactics to Get Shit Done.

As a woman, and contrary to Dale Carnegie’s advice, I have found nothing so impactful to my career trajectory as to disagree with those in power.

I don’t mean being “difficult,” or having a negative attitude. I mean that when people with decision making power have proposed ideas, I brought up a risk they hadn’t accounted for or explained how I would approach it differently to achieve a better result.

Fragile leaders have gotten defensive or ignored me, which is great. I make it a point to only care about impressing people I respect, and I don’t respect people who don’t listen to me. Strong leaders, however – the kind with whom I’d like to ally and who can meaningfully affect career advancement – have listened. Interestingly, the more powerful the person, the more they have listened. Even the narcissistic psychopaths have listened, because they realize there is self preservation in keeping those who ask the smart questions close. Sometimes they put me in front of their boss as a curiosity (look at this precocious young woman with a good idea!) and had me explain it again. Then later, they “circled back” to get my thoughts on the next project, and I was asked to lead the one after that. Most of all, they remembered me.

There is one point where Carnegie is right though: never disagree in front of others (unless it’s the “others” you actually intend to impress – a risky advanced tactic). Get time in private, not via email, look the person in the eye, and say, “I see where you’re going with X, but I’m not convinced about Y. What if we Z?”

During “flexible leadership” seminars, you’ll be told to tone it down a bit, to use language like “I like the idea of X, but I was wondering if you had considered Y.” It hardly even sounds like you’re disagreeing! Of course, that’s the point, from the perspective of male leadership who train other men using Carnegie’s wisdom, while you happen to be in the room. Women who tone it down, however, come off as sounding “helpful.” That’s not the goal. You want to sound like you saw a potential problem, escalated it, and proposed a fix. You clearly want to Get Shit Done, and any person in power will remember that. It’s about building trust, and respect.

The Art of Yawn

Perhaps the most over-quoted book in the history of pompous business advice, The Art of War‘s includes bon mots like

“Know the enemy and know yourself; in a hundred battles you will never be in peril.”

“Those skilled in war bring the enemy to the field of battle and are not brought there by him.”

On the whole, it’s not terrible advice, and it turns out you can retrofit modern business philosophy on ancient military tradition to get some decent insights.

Cartoonist Jessica Hagy did just that in her well received book, The Art of War Visualized. (Shout out for women business 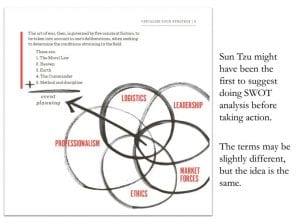 But mostly, AOW is quoted on the LinkedIn profiles of dudes who list Fight Club as their favorite movie and then used as an excuse to think of the business world as a zero-sum battle – winners and losers, allies and enemies, command and control. Many see acquisition of power as the ultimate goal. Sure, business success is measured by shareholder value, but that’s so nebulous! The ability to force one’s will upon the world is so much more tangible and… satisfying.

“Power” seems like this one ominous force, but it’s simply the many mechanisms by which we affect our surroundings, beyond what we can do with our own two hands. It’s generally accepted that there are five types of power:

Who doesn’t want to be a Prince(ss)?

Apparently a “Magical Asian” wrapper makes it ok peddle Sun Tzu’s sentiment that “All warfare is based on deception. …Hold out bait to entice the enemy. Feign disorder, and crush him” to fresh MBAs without ethical quagmire. You know who else said stuff a lot like that?

It must suck to be the guy whose philosophy came off as so abhorrent that your name is forever synonymous with being an asshole (and perhaps it goes without saying, a misogynist). But really, a lot of Machiavelli’s advice in The Prince is no different from the standard business advice we hear today:

“There is no other way to guard yourself against flattery than by making men understand that telling you the truth will not offend you.”

“The first method for estimating the intelligence of a ruler is to look at the men he has around him.”

“Appear as you may wish to be.”

Of course, Machiavelli is best known for his lack of empathy and endorsement of deception as a means to an end, and this has led to studies linking toxic workplaces to Machiavellian political intrigue. Meanwhile, women have spent decades being told that how you get there matters as much as that you win… while simultaneously being slammed for being “catty” or being “drama queens” for engaging in the same political machinations men embrace as high sport when presented in the guise of medieval political philosophy.

Let’s drop all the baggage and euphemisms. “Networking” is about making powerful allies. “Due diligence” is about information arbitrage. “Message tailoring” is about narrative manipulation. We are already engaged in all the same behaviors as our male peers, we just aren’t doing them enough or patriarchal thinking has deluded us into thinking there is a moral high ground we simply cannot cede, lest our victory somehow be less… victorious.

You know what feminist power goddess Stella Gibson thinks about that?

The truth is that while you’re worrying about the “drama” that may result from calling out a coworker who chronically takes credit for your work, men are reading the 48 Laws of Power: the book Machiavelli would have written if he first read the Ferengi Rules of Acquisition, and then followed it up with a quasi-PUA seduction book. It’s not that men are better at career politics, it’s simply that they have been taught to take it to eleven to succeed, and we’ve been taught that anything over a seven is counterproductive.

I leave it as an exercise to the reader to decide if going full Prince(ss) is good for one’s career long game, but might I suggest this: It is common negotiation advice for women to take their high point and tack on 30% to get close to what a male peer would request. We are chronically conservative and overestimate what comes off as aggressive. Or, given that you already come off as aggressive, how much more aggressive do you need to be before you can maneuver yourself into a position of power above those who complained about you being aggressive in the first place? Assume the “power play” business practices you think are tactics of last resort are more common than you expect – in fact, assume they are happening constantly in rooms where you are not. Take however much of an asshole-level you think is appropriate and add 30%. Shoot for Machiavelli, and you’ll land somewhere around Seth Godin.

This has been a guest post from this month’s Expert-in-Residence in The Bullish Society. Join us for more. 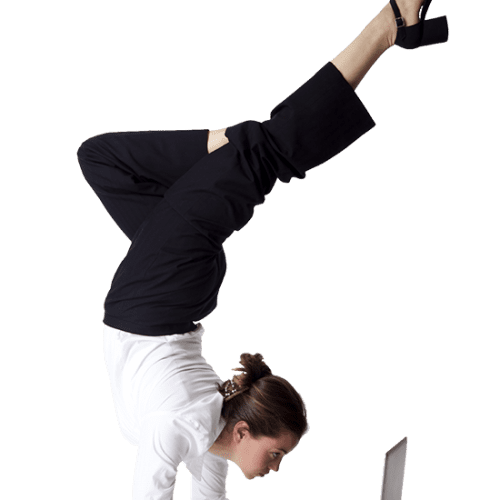 Friday Links: A Drove Of Bullicorns 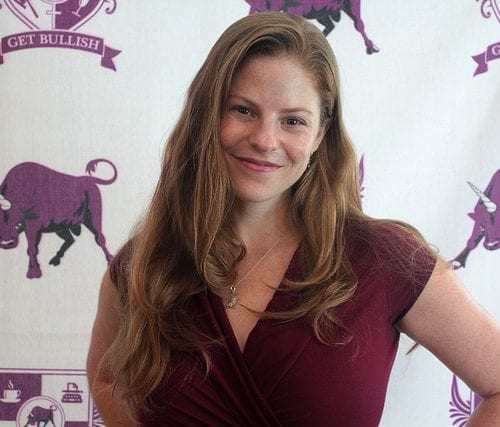 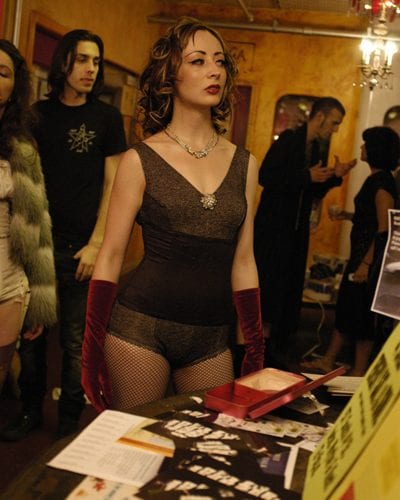 Bullish: What I Learned About Business from Being a Low-Rent Model