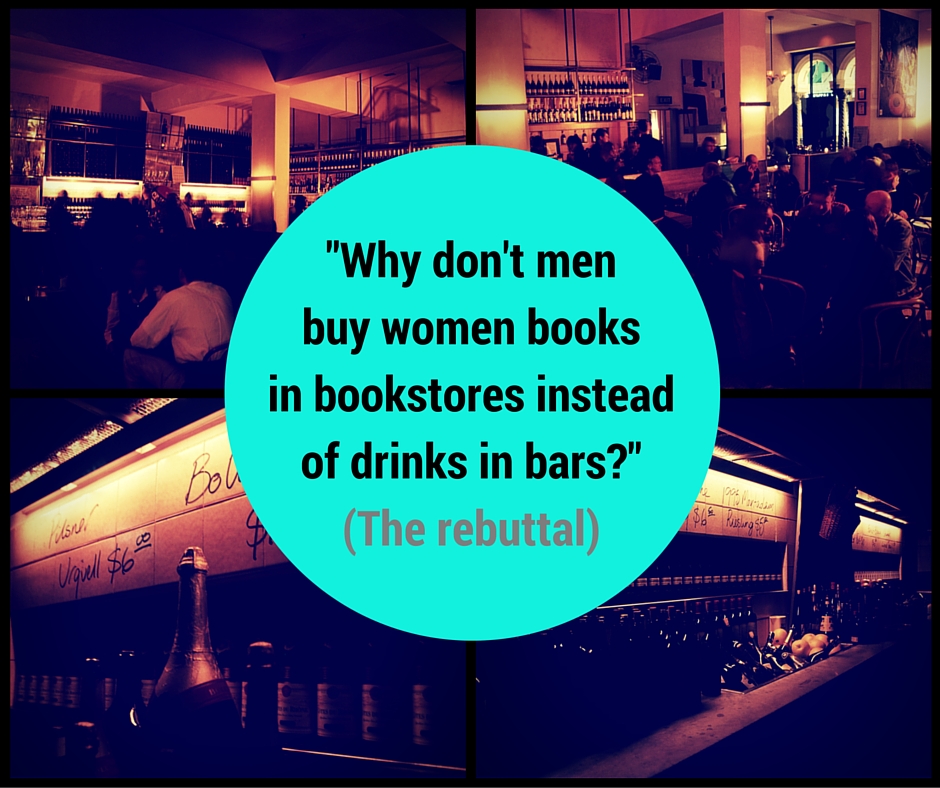 I’ve been seeing this graphic going around social media for a year or so now: 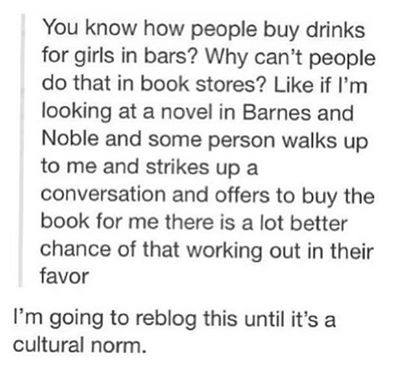 It’s nice that the writer of this graphic changed “girls” to “people.” We like most things gender-neutral around here.

We don’t really like the idea that anybody has to buy anybody anything.

But I think this argument fundamentally misunderstands what’s going on here a great deal of the time. Here’s a response I wrote on Facebook: 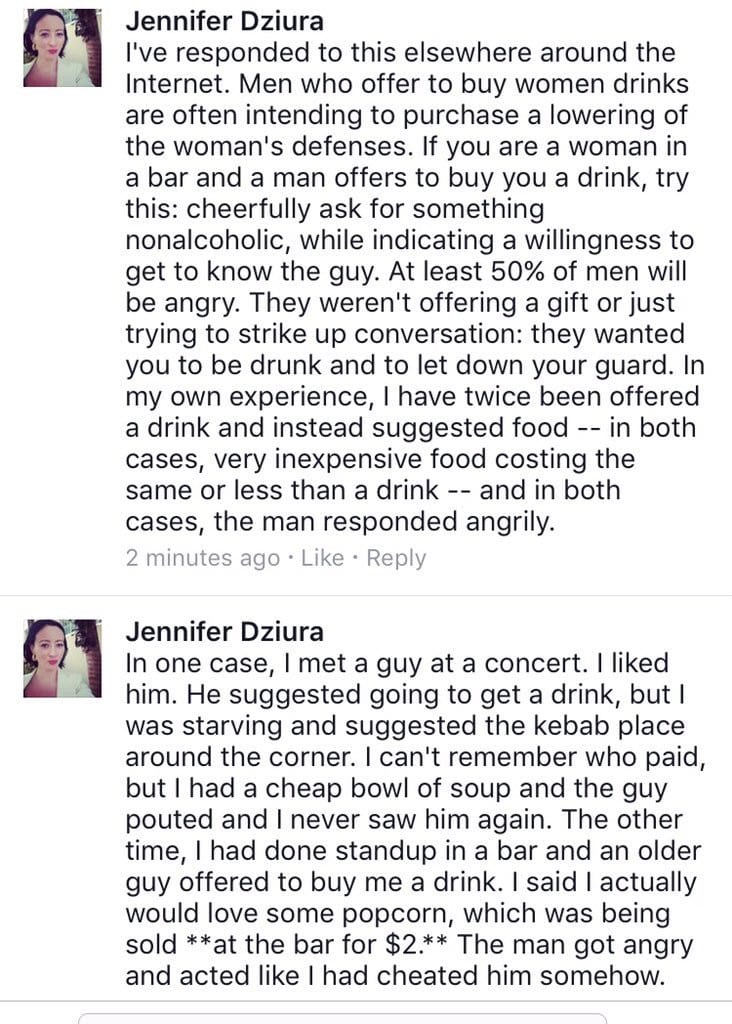 I reposted this to Twitter and received – in addition to messages from many food-loving men who do not do this – the following response, reposted with permission:

@jendziura this is so true! Completely unmasks true intentions are. I’ve turned down drinks and told the guy that I’ll buy HIM a drink–

@jendziura and I’ve never been taken up on the offer. They often get confused and decline. Like dude I’m giving YOU a free drink!

@jendziura or does a lady buying you a drink emasculate you? dunno. They don’t ever get mad per se, but they do leave me alone after that.

@jendziura maybe the “alpha-ness” of my suggestion just turn them off. Fine with me

Those guys didn’t just want a chance to talk.

In Kirsten King’s I Don’t Owe Anyone My Body, King tells the story of a date with a sexually predatory man who seems to think that favors are something you bestow upon women – any favors, even unwanted and inconvenient ones – that cumulatively build up to being owed sex:

“I was going to show up with flowers, but I thought that would be too much,” he said, laughing. I resisted asking him what I would have done with a bouquet of flowers at an open-floor concert and smiled back at him.

I was once involved with a man who insisted on cleaning the gutters of my apartment building – something that was the landlord’s responsibility, not mine, and which I specifically asked him not to do, because it was very dangerous and I didn’t care about the gutters. He did it anyway. I insisted I hold a ladder, which I told him I was not strong enough to do well. “Stop doing this, this is ridiculous,” I said, repeatedly. “I don’t care about the gutters.”

Once the gutters were done, he spent the next several weeks reminding me, “I RISKED MY LIFE TO CLEAN YOUR GUTTERS.” This was always an argument, to get me to agree with him or do what he wanted.

His goal had been to put me in debt to him.

Someone buying you a book could get similarly weird. Presumably, you’d be obliged to give that person your contact information so you could discuss the book once you’d had a chance to read it. What if you’d been shopping in the self-help section and some would-be suitor offered to buy you the book you were reading at that moment, but it turned out the book was “Getting Over a Loved One’s Death” or “How to Be Less Codependent”? Awkward. Or, worse, someone insists you take home one of those Game of Thrones books and then repeatedly emails you asking whether you found the sex parts sexy.

But mainly, there’s a toxic strain in heterosexual dating in which men make overtures by buying things for women. Sometimes, because they’re just following cultural rules as best they know how. Everybody gets nervous. It’s sometimes nice to have a script, like “Can I buy you a drink?” But sometimes, men do this because they are predators. Or sometimes they just want to control you for a few minutes, to subject you to a condescending conversation you feel obliged to continue until your drink is done. It is often not possible to tell the difference until it is too late.

To be clear, I got a lot of responses from guys who would be DELIGHTED to buy a woman a pretzel (or have a woman buy them a pretzel) and get to know her. Upon further questioning, those guys were not the same guys who are hanging out in bars offering women drinks. (Limited sample size here, obviously.) I’m concerned about dating conventions that result in decent guys inadvertently behaving in ways that make them seem predatory. It’s not a good script.

I don’t have all the answers to how to make dating better, but we’ve spent decades in the toxic pattern of “man takes woman out to dinner/drinks/etc. and then tries to guilt her into sex,” and it’s old, it’s tired, it’s gross, and it needs to stop. People should have sex because they both want to. People should, in general, take turns paying for things. Someone should start a sexy pretzel bar. 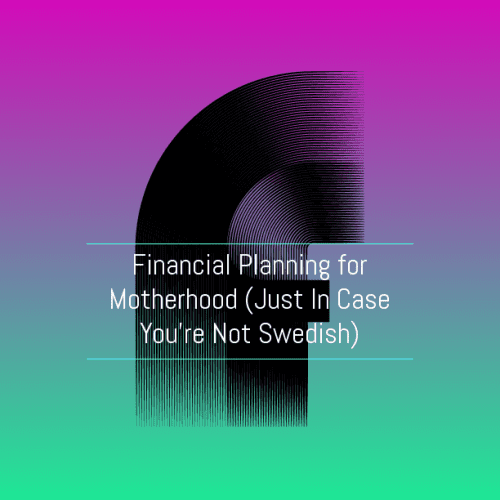 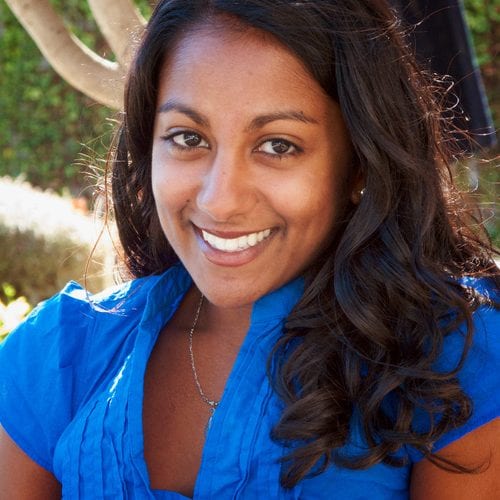 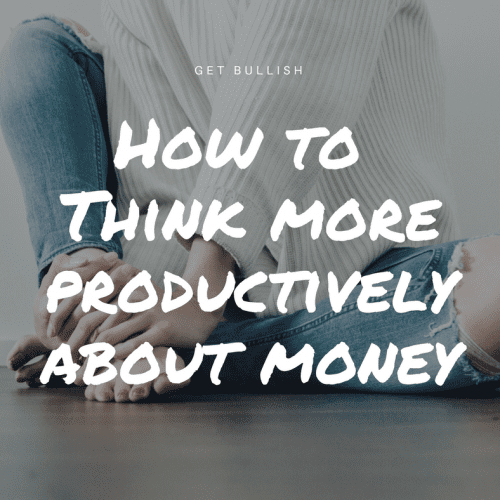