“Following your dreams” seems to be the current American religion.

(See posts by other authors on TheGloss: My Sister Gave Up Her Dreams, and Sometimes I Hate Her For It, and I Gave Up My Dream, and I’d Do It Again.)

What the fuck are “dreams,” anyway? And why are they so sacred in our culture, while “goals” — like everything else in the world — are subject to criticism and revision? Think about this: If someone says, “One of my goals is owning a house / farming alpacas / getting an MBA,” you might ask, “Oh, why?” Upon reflection, your friend might adjust or abandon her goals for new ones. That’s cool. But if someone says “My dream is to be an actress!”, it’s totally taboo to question that, as though “taking away someone’s dream” makes you an evil cat that sits on children’s chests and steals their breath in the middle of the night.

As far as I can tell, “dreams” are mostly vague, unrealistic, often quite selfish goals. Not all of them, of course: Martin Luther King had a dream that his children could one day live in a nation where they would be judged not for the color of their skin but for the content of their character. But having a dream to be a ballerina is not the same thing. Most people’s dreams are dumb.

Or, at least, most people’s dreams are provisional. Based on fleeting whims and momentary circumstances. After all, where do “dreams” come from, anyway?

The Origin of These Vaunted “Dreams”

(See Bullish: Extreme Advance Planning for Very Smart Women and Bullish: How to Age with Panache.)

Kids don’t think about the various stages of adult development wherein the narcissistic look-at-me pursuits you may enjoy at 24 can seem silly at 34, or wherein you would simply want different things at different stages of life. They can’t imagine wanting to craft some weird sort of career out of doing a little of three different things so you can have the time and freedom to swim in the ocean whenever you want. Kids sometimes declare that they will be astronauts and have six kids and lots of horses, because kids don’t realize that kids and horses do not appreciate when you leave them for a four-year space mission. Kids are idiots.

We shouldn’t tell them that, of course. If your kid is struggling with subtraction, it would be terribly mean to tell her that after that, there are fractions, and then later, algebra, and that the thing she’s struggling with right now is something any unemployed, shiftless adult can do. When you’re six, persevering in learning subtraction is character-building. You don’t let on to a kid how small a thing she’s accomplishing, and how many larger things will need to get done after that. But kids are idiots. That’s why nature made them so adorable, because otherwise we would find their total incompetence repellent.

Placing too much importance on long-held dreams — as though childhood is some place of deep primal truth rather than of turbulence, mistakes, awkwardness, and confusion — is stunting and illogical.

Remember Randy Pausch? Before dying of pancreatic cancer in 2008, he gave a moving Last Lecture (also turned into a little book that he, um, dictated while riding a stationary bike, and that, as Christopher Hitchens pointed out, contains an entire chapter on the value of clichés), in which he declared that the meaning of life is “fulfilling childhood dreams.”

I read this book, and it was terrible. (I’m not the only one who thinks so.) Here’s one example of Pausch’s childhood dreams: Being Captain Kirk. (Or a bird! Or a plane! I’m Abraham Lincoln AND a ballerina!) Pausch later declares this dream fulfilled because he … met William Shatner. Which is SO not the same thing.

Sure, meeting William Shater is cool. But that’s what makes your life worthwhile? The dude is an actor.

Look, when you develop a terminal illness, you don’t suddenly know the meaning of life. Maybe a few people have revelations. But most are just the same people, except they feel like shit and people keep poking at them, and soon they’re so full of drugs that they can barely think and thus are, in fact, much less likely than before to have a good grasp of the meaning of life. I’m pretty sure a lot of people’s last thoughts are like, “This blanket is too warm” or “OHGOD MY LIVER.” So, you might as well think about this stuff now, before you develop a terminal illness and all the sudden people put you on the spot to be really profound.

Some “Dreams” Are Better Left As Dreams

Some “dreams” are better left in the realm of fantasy, hobby, or once-in-a-lifetime experience. For instance — for me — modeling. I wrote about my brief, straggling “career” as a low-rent model in Bullish Life: What Modeling Taught Me About Men, Money, and Life and Bullish: What I Learned About Business From Being a Low-Rent Model. But my point here is that modeling had vastly diminishing returns. The other models I knew reported much the same thing: The first photoshoot was so exhilarating! You’re a model now, baby! And then you can’t wait to see the photos! You show them to everyone!

After six months of this, you do a shoot and someone sends you a CD of 300 photos of yourself and you don’t even look at them. You get tired of seeing your own damn face. Le shrug. I also got tired of people touching me and of being cold due to being constantly underdressed. I discovered that I am really bad at keeping my eyes open in direct sunlight. (I’m also too short and have two expressions, max, if you are willing to count “vacant stare” as one of them.) I was constantly annoyed that you were supposed to show up at 9am and then no one even started putting makeup on you until 11. So inefficient! No respect for my time! People are also very patronizing to models (for instance, assuming that you will not be able to tell time off of a clock with hands!)

A lot of dreams are not as good in reality. Tell people you want to be a lady astronaut and everyone thinks you’re amazing. What some of them are thinking is: Wow, I’m glad someone’s holding up the banner of indefatigable womanhood, because me … I just don’t have it. To be an astronaut, you have to train in a zero-gravity tunnel that makes virtually everyone develop vertigo and throw up. As someone who was once crippled by Meniere’s Disease, which is a thing where the fluids in your inner ear get fucked up and you feel like someone’s violently spinning you in a chair well past the point that you want to die, the idea of anyone doing this voluntarily is anathema. Furthermore, as an astronaut, you will also enjoy celibacy, near-zero privacy, dehydrated food, and access to basically none of the things you like. Your hair will always be standing on end, you never shower (just wet wipes!), and you don’t even want to know the details of going to the bathroom in zero gravity (there’s a kind of vacuum-cleaner involved).

Some dreams suck once you get into the details, and it’s totally fine to change course.

See how that subject heading was not short and snappy at all? Yes, that’s how a well thought-out life mission tends to look.

Sure, a few fully self-actualized adults have concise goals that also sound like dreams: Free Tibet! Stop violence against women! Fix as many cleft palates as possible!

Cool. But unless you are utterly single-minded, you are probably going to need a paragraph to lay out your values, the things you need in order to be happy, the things that would be super fucking awesome on top of that, and how you plan to get there.

Furthermore, not only are most dreams chosen sort of capriciously, most dreams are jobs. In real life, most jobs are means to an end. Your vision really should extend beyond a job.

So, probably more than a paragraph.

See Bullish: 5 Ways to Improve Your Life in 5 Minutes for more on writing a mission/vision statement, Bullish: Screw New Years Resolutions — Try Designing Your Career, and Bullish: Maybe You’re Not Actually a Lazy Procrastinator for more on defining your values.

And feel free to abandon your “dreams.” 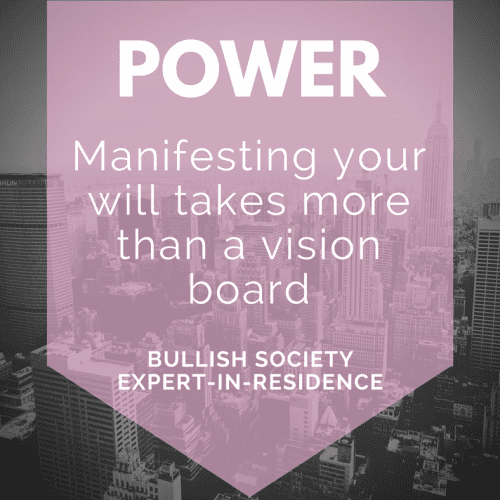 Coming Up in The Bullish Society: Level Up with Your New Career BFFs