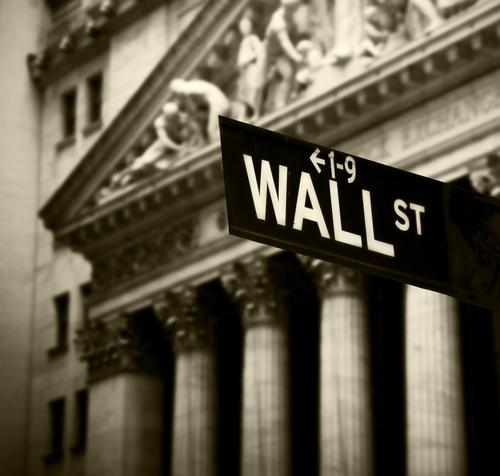 This recruiting season, an NYU student wrote a “laughable” cover letter for J.P. Morgan. According to Yahoo! Finance:

Since Thursday, February 2, when a Bank of America Merrill Lynch director forwarded the cover letter out to his entire team, offering drinks “to the first analyst to concisely summarize everything that is wrong with” the note, it has passed through more than a dozen firms. 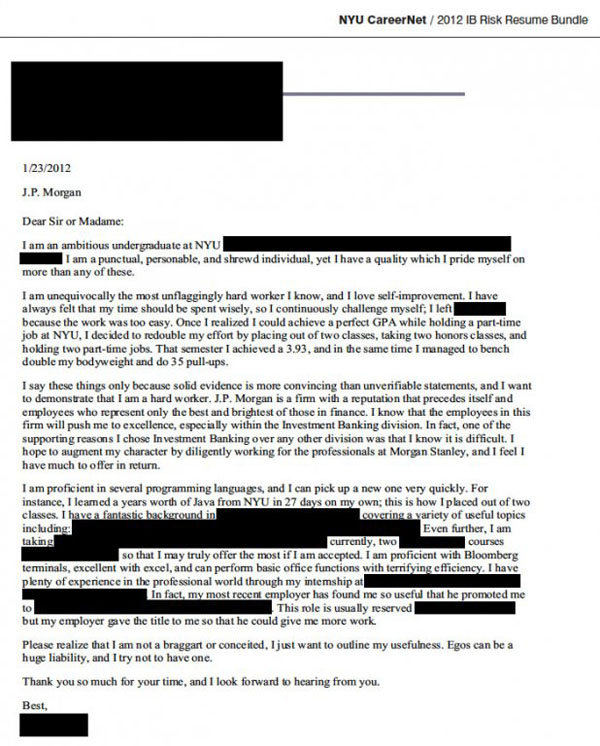 I think I can guess what is wrong with this note:

– The writer brags about his bench press.

– He left a job because “the work was too easy.”

– He can “perform basic office functions with terrifying efficiency.” (Terrifying!)

– It contains the sentence, “Please realize that I am not a braggart or conceited,” which much like a t-shirt that says “Sexy” in rhinestones, usually indicates a lack of self-awareness on the part of the speaker or wearer.

This is not an appropriate letter for an investment banking job.

I, however, rather like the letter. I want to know this guy. I would strongly consider hiring him. (I’m pretty sure it’s a dude, since few women can bench double their bodyweight.)

The writer is, for instance, a tremendous risk-taker (surely he knows that this cover letter is non-standard). He is ballsy. I would put him in sales and let him prove himself. I think he would make me a lot of money.

He learned a year’s worth of Java in 27 days? Great. You know what sucks, as an employer? Paying to train someone when you know that your young employees are likely to bolt at any minute. This guy will at least minimize such expenditures by learning more efficiently. (Go here for a Tim Ferriss talk on Accelerated Learning.)

The Alternative to Taking Risks is Being Ignored 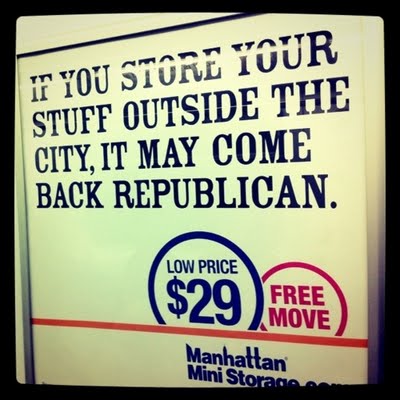 New Yorkers are very accustomed to these ads: “Your closet space is shrinking as fast as her right to choose,” “If you don’t like gay marriage, don’t get gay married,” and the most honest: “Remember, if you leave the city, you’ll have to live in America.”

Better to be loved by some and hated by others than to be ignored by everybody.

This guy is getting pissed on by Wall Street, but I want to buy him a beer.

I don’t think he belongs in the highly regimented world of corporate finance. However, I suspect he’ll be just fine. Maybe he doesn’t really want to work at J.P. Morgan; he just put in his application (nothing to lose, right?) while working on all his other cool projects.

He’ll be Tim Ferriss within the decade.

Obediently Writing a Normal Resume and Waiting Around Is Not That Great a Strategy, Either

I wrote in Bullish: Basing Your Career on a Resume is Like Competing in a Brothel Lineup that well-written bios, personal relationships, publishing history, and personality are far more important than resumes. Having an impressive resume is a basic requirement, like showing up in a clean shirt. (I also talk extensively about [gay male] pleasure coach Bob Patrick and his excellent efforts in appealing to market segments interested in butts, nipples, staying half in the closet, and/or feeling better about themselves.)

Here’s something interesting – I recently hired a new part-time assistant. Here’s how it happened.

Last year, after I wrote Bullish: How to Woo a Mentor or Forge Your Way Without One, a reader named Haley emailed me and said, “I’m probably the millionth person to respond to your article by asking you to have coffee while I’m in town, but….” Actually, she was the first. We met up. She didn’t have any problems, actually – she was doing very well – so it never really occurred to me to check in and see how she was doing.

Nearly a year later, I posted on Facebook how hard it was to find a virtual assistant who does not have a horrific website made in Dreamweaver circa 1998. Haley sent me a well-crafted email pitching herself for the position, while pointing out that she would not be able to begin until March (I view having some reasonable limits and being clear about them as a sign of self-respect). She offered to send her resume, and I kind of felt like, “What am I going to do with that?”

As my best friend Molly Crabapple, illustrator and arts entrepreneur, often remarks, resumes don’t give you a writing sample, which is important in pretty much all jobs now. They don’t tell you much about a person’s personality, speaking skills, phone skills, or ability to respond to unique circumstances, which occur just about all the time. Resumes do show that you are good at following directions, which is not that helpful in most jobs anymore, because we have outsourced all of those jobs to India and China.

I think I would respond well to a cover letter that took the form of, say, a list of “10 Ways I Will Be Like a Ninja Who Tirelessly and Stealthily Generates a Profit For [Your Business].” I certainly respond well to people who believe in quantifying accomplishments, in “solid evidence,” and in fully explaining their “usefulness” to the employer (instead of making it all about what a special snowflake they are).

As I said in this week’s column on TheGloss on overcoming perfectionism, there are just too many people out there competing to be the valedictorian, the prettiest girl, the first picked for the team, the one with the best resume and canned answer to “What is your greatest weakness?”

Choosing to eschew those things does mean you won’t get an Olympic gold medal – or probably an investment banking job – but it opens up a much wider array of possibilities that are often, paradoxically, more exciting and yet more achievable. 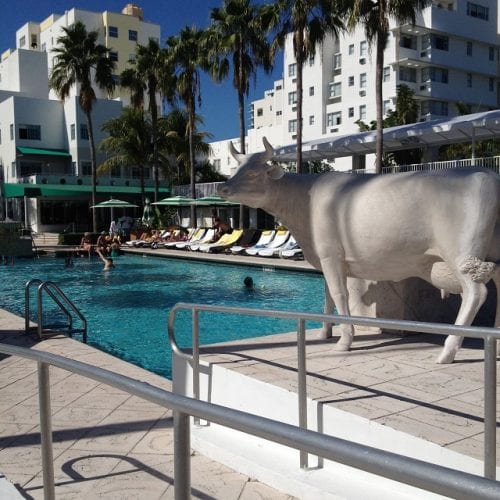 Conquering Your Schedule Hour by Hour 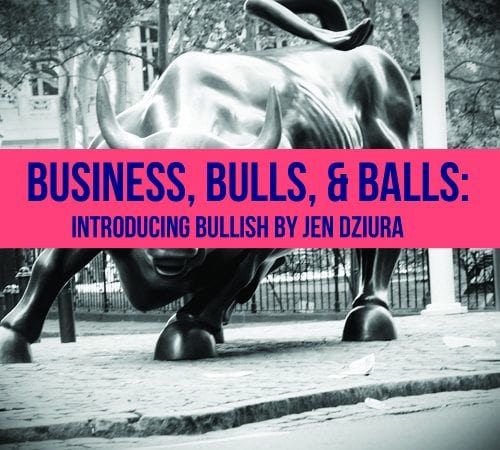 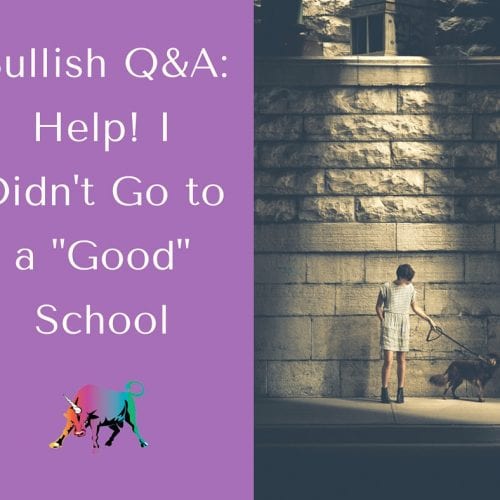