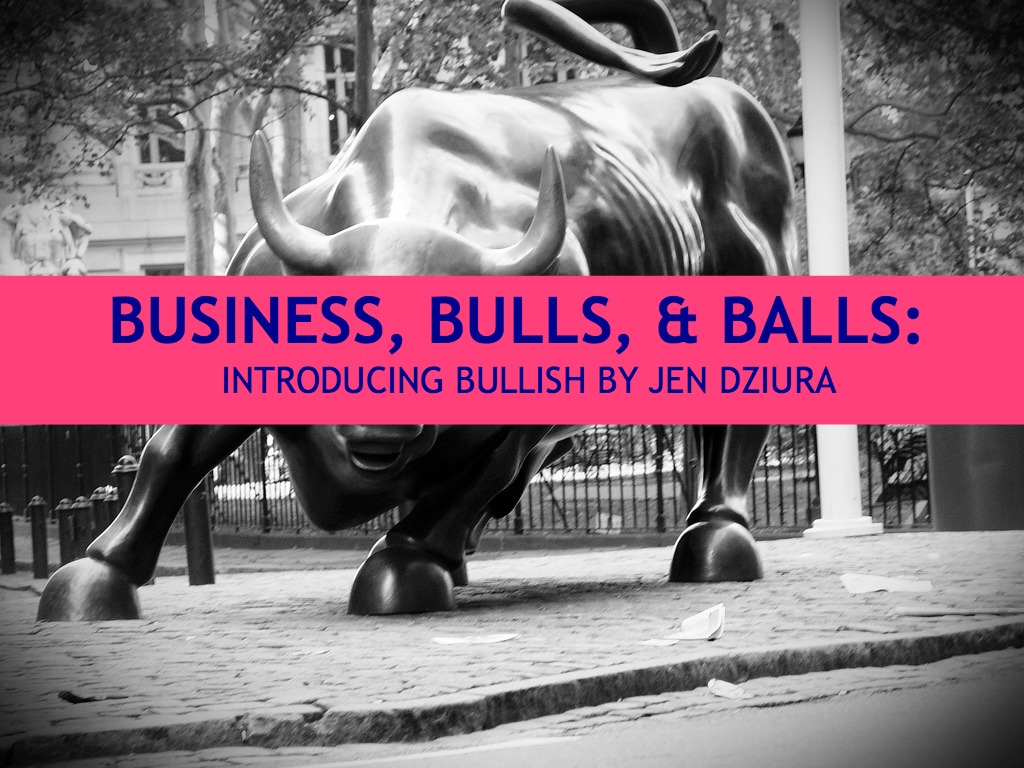 Welcome to a new column on TheGloss! Every Tuesday, “Bullish” will take on issues related to the workplace, money, and entrepreneurship.

Why “Bullish”? The bull has long been the totem animal of Wall Street — the snorting, aggressive paragon of masculinity associated with rising financial markets. I live three blocks from the Wall Street bull (which, technically, is located on Broadway).

The bull is made of bronze and dulled from the elements — except for its balls, which are large, round, and extremely shiny. Let me be clear: the balls are the main attraction. Visit the bull any day of the week, and you will see nothing but tourists posed at the back end, photographing each other fondling and caressing the testicles of our nation’s economic system.

A female bull is, of course, a cow. Is there a less flattering (and less aggressive) animal to be compared to? (If you’re interested in downward-trending markets, a female bear is called a sow, which doesn’t sound any better).

Of course, there are some who think “bullish” aggression is overrated. New York Magazine recently ran a feature entitled What if Women Ran Wall Street? The article points out the relative conservatism and equanimity of women traders (a highly self-selecting group, of course), and repeatedly suggests that testosterone caused the global financial crisis:

Anna Dreber, an economics researcher at Harvard’s Kennedy School, started studying testosterone as a possible explanation for why there tend to be few women in certain fields—math, say, or kickboxing, Dreber’s sport of choice. Through studies conducted at the Harvard biological-anthropology department, Dreber found that appetite for risk in simulated investment games correlated with high testosterone levels and with facial characteristics such as sharp cheekbones and strong jaws that are normally associated with the hormone. “There is a clear sign that something biological explains risk taking,” she says. Testosterone is not the only chemical that affects it—the stress hormone cortisol has a role, as well as the neurotransmitter dopamine, among others—but it’s by far the most powerful.

Dreber has been thinking about the issue a lot recently, especially after reading the reports about AIG’s London office, a hothouse where a small group of men almost brought down the world economy. “When you have this place with all these male traders taking enormous risk,” she says, “I can imagine that being in a very competitive environment with lots of other competitive males makes the testosterone go up, which leads to even more risk.” Another study Dreber has in the works will look at the effects of the hormones in the birth-control pill on women, because women having their periods have been shown to act more like men in terms of risk-taking behavior. “When I present that in seminars, I say men are like women menstruating,” she says, laughing.

There is also no dearth of literature about the supposed “women’s way” of doing business, perhaps finding its extreme in Laura Day’s Deepak Chopra-endorsed tome How to Rule the World from Your Couch, essentially a book about developing your psychic powers so you never have to be aggressive again. Michelle Goodman’s 2007 The Anti 9-to-5 Guide bestowed upon ladies-doing-it-for- themselves the moniker “fempreneurs” (cringe). How is a “fempreneur” different from an entrepreneur? I’m not totally sure, but the book repeatedly mentioned dogwalking as an alternative to full-time employment. Business networking organization Ladies Who Launch (cringe again) created something called “Fresh Entrepreneur,” which gives entrepreneurship all the sheen of a new lip gloss. From the current “Fresh Entrepreneur Tip”: “Beware that you may have fear around some strategies like public speaking or writing because you have suppressed or shut down your authentic creative expression around these strengths throughout your life, perhaps due to childhood influences or other trauma.”

I started my first company in 1998, as a sophomore at Dartmouth. It was the height of the dot-com boom, but the landed gentry at my alma mater largely ignored the VC free-for-all, instead sticking to the time-tested plan of majoring in econ or poly-sci and moving on to consulting firms and investment banks. I was, as far as I could tell, the only student on campus with a cell phone.

It all got started because, wanting to make a website showcasing some articles I had written, I began to teach myself web design from a series of books and online tutorials. HTML turned out to be mesmerizingly fun. I moved into a co-ed fraternity mainly peopled by computer science majors, and all the sudden my living room was a font of technological know-how. I started checking the student job board for gigs and hitting up every interview for a campus department that needed a website. I won them all — not because I was the best web designer on campus, but because I was really, really good at explaining what a web designer did and exactly how I would perform that job for the department in question without making those in the department feel stupid or left behind.

A few months later, I decided to upgrade my skills, so I got this book on programming in Perl (I promise, that was the thing to do in 1998) and hunkered down in the campus computer center. Half an hour later, I had made one of those cute little programs that causes “Hello, World!” to appear on the screen. Nice. I looked next to me, where a slightly greasy-looking young guy in a hoodie was coding away. It was as though the heavens had opened up: I looked at that guy and said, “I’ll bet he would work for me for eight dollars an hour.”

I suppose it shouldn’t have seemed like such a revelation for someone who was majoring in philosophy, but, at the age of twenty, I was astounded to discover that learning (as in, learning to code in Perl) wasn’t always cost-effective. Managing people was cost-effective. Finding people who were good at coding in Perl but terrible at interviews was very, very cost-effective.

My little HTML habit morphed into a web design and internet marketing firm whose greatest coup was creating a 3-D computer animated commercial which our biggest client showed at the Cannes Film Festival. (Not IN the Cannes Film Festival, mind you. AT the Cannes Film Festival. Like on a laptop sitting at a tradeshow booth). This company’s CEO constantly tried to convince me to accept their worthless shares in place of cash, even after the work was done and the invoice was sitting in their inbox. The company dissolved before I graduated. I wasn’t a big enough thinker to have made millions from the bubble, but I did graduate from college with eight part-time employees and a finely-tuned bullshit detector.

So, I’ll see you here every Tuesday for a new installment of “Bullish.” (I’ll still be writing NerdGlam on Thursdays). Here on “Bullish,” we’ll take on organizations for women in business (I have been a member of Ladies Who Launch and of the National Association for Women Business Owners) — what role they serve, whether they’re still needed, whether women in general do have a different approach to entrepreneurship. I’ve got an interview from one unconventional twentysomething woman entrepreneur who takes on the notion that a company has to be “scalable” to be worthwhile. I’ll talk about women-owned business certifications and those who abuse them. We’ll also take on novel ways to make money (and to survive in the city), which of our foremothers’ financial suggestions we should cast aside, when being a woman is an advantage (did you know redheads are the best salespeople?) and how to deal with people who are a bit too bullish for anyone’s taste. We’re also taking suggestions in the comments. Welcome to “Bullish”! 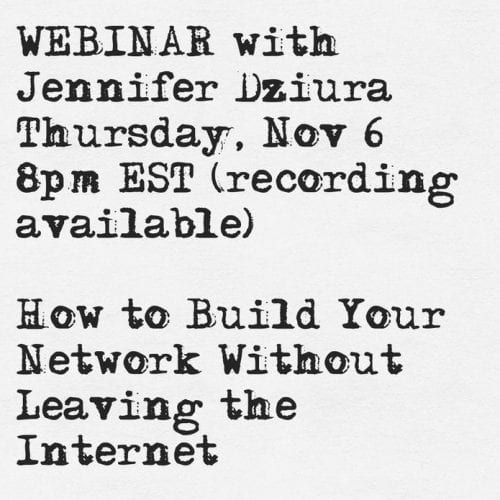 November 6 Webinar: How to Build Your Network Without Leaving the Internet 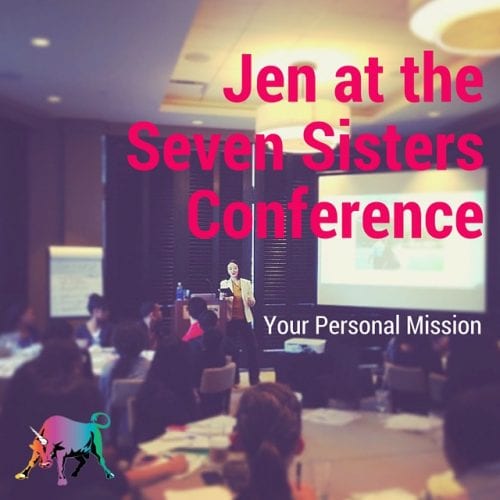 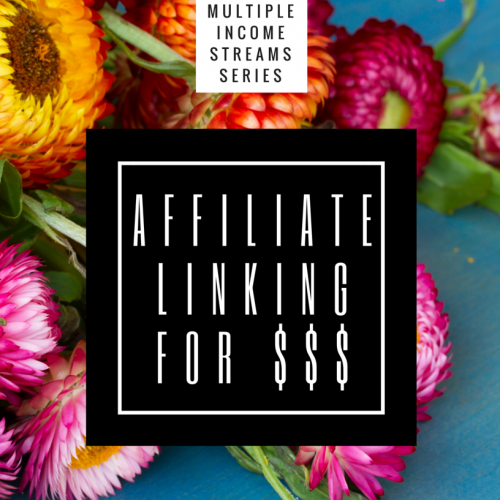